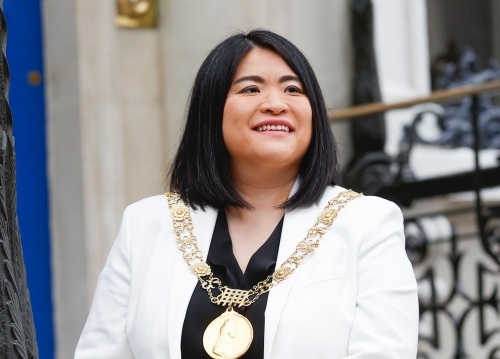 Hazel Chu is the 352nd Lord Mayor of Dublin.

She was elected at the Annual Meeting of Dublin City Council in Round Room at the Mansion House on the evening of 29 June. This makes her the 9th female Lord Mayor and the first born to migrant parents.

Hazel Chu was born and currently lives in Dublin. She was born in a working-class family, her parents having migrated to Ireland from Hong Kong in the 1970s. Hazel was the first family member to finish school and to go to college. She studied Politics and History at UCD and trained at the King's Inns as a barrister.

She has been an active member of the Green Party of Ireland and in 2019 became its chairperson. In the same year, she was elected to the Dublin City Council with the single highest share of the vote of any first-time candidate in a local election (33.1%), to represent the Pembroke ward.

During her one-year term as Lord Mayor of Dublin, Chu is expected to advance her party’s priorities, namely alternative transport options and fight for cleaner air and for a more liveable city.