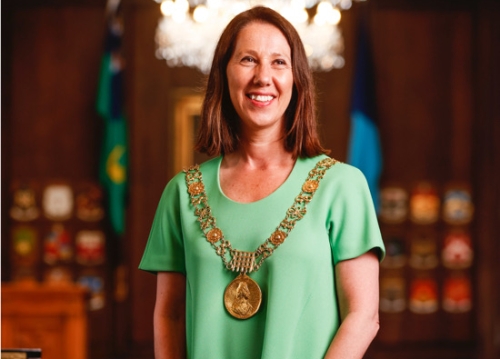 Councillor Alison Gilliland was elected the 353rd Lord Mayor of Dublin at the Annual Meeting of Dublin City Council held on 28th June 2021 in the Round Room at the Mansion House. Councillor Joe Costello was elected the Deputy Lord Mayor. Originally from Ballybay, Co. Monaghan, Cllr Gilliland has called Dublin her home since 1995.

A member of the Labour Party, she was first elected to Dublin City Council (DCC) in 2014 representing the Beaumont/Donaghmede local electoral area and, following a boundary change, was re-elected in 2019 representing the Artane/Whitehall local electoral area. She was Chairperson of the DCC Strategic Policy Committee (SPC) on Housing and is a member of the Finance SPC. She is also an alternate member to the European Committee of the Regions and sits on the Commission for Citizenship, Governance, Institutional and External Affairs (CIVEX). Cllr Gilliland worked as a Senior Official with the Irish National Teachers’ Organisation (INTO).

She headed up the INTO Learning Section and was their Equality Officer, supporting the union’s Equality Committee and working on issues pertaining to LGBT+ inclusion, racial, ethnic and cultural diversity and member reproductive health related matters. She represented INTO on the Irish Congress of Trade Union’s Women’s Committee and on the European Trade Union Committee for Education’s Standing Committee for Equality and was a member of the Advisory Group leading the ETUCE’s Embracing Diversity in Education project. Graduating with a Bachelor in Education from Trinity College Dublin, she is a former primary teacher. She taught for several years in Spain before returning to Dublin to teach in both Our Lady Immaculate JNS and SNS in Darndale, Dublin 17 and in Swords Educate Together NS. Cllr Gilliland believes in lifelong learning. She holds a doctorate in Education and Research from the University of Nottingham awarded for her research into young teacher union activists’ views and experiences of involvement, voice, and agency in their union and its influence on their concept of professionalism.

She has also completed studies with Dublin City University and the London School of Economics in the area of leadership and with Community Law and Mediation in the area of housing.

Alison Gilliland is the 10th woman to hold the office of the Lord Mayor of Dublin.